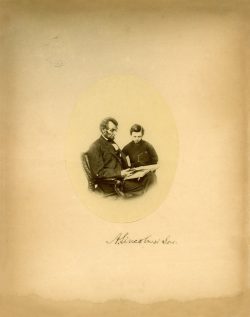 Signed A. Lincoln, this is one of only two known signed prints in existence. It was originally gifted by President Lincoln to Gustav Matile who served as U. S. Court Commissioner for the Wisconsin Eastern District in Green Bay. At his death in 1908, Matile donated the photo to the Kellogg Public Library (now the Brown County Library). It was acquired by the Society in 2007 as part of the Heritage Collection and is held by the Neville Public Museum.