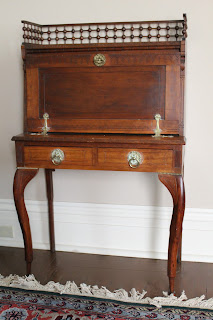 In 1924 the Society purchased this cherrywood table that belonged to Zachary Taylor (1784-1850) while serving as commander of Fort Howard (1818-1819). His possessions were all sold locally when he was transferred to Fort Crawford in Prairie du Chien. Zachary Taylor subsequently became the 12th President of the United States (1849-1850). The table is on display at the newly-renovated Guard House at Heritage Hill State Historical Park.

The Society acquired this desk in 1936. Originally a sideboard of Fort Howard Commander Zachary Taylor (1784-1850), the sideboard was damaged in a fire. In 1886, Deborah Beaumont Martin, founding member of the Green Bay Historical Society, an ardent preservationist, and youngest daughter of prominent Green Bay attorney and civic leader Morgan L. Martin, had the undamaged wood converted into a desk. It is on display at Historic Hazelwood House (Brown County Historical Society), Deborah’s lifelong home.

Restored by Tony Rajer the painting.  Housed at the Neville Public Museum.