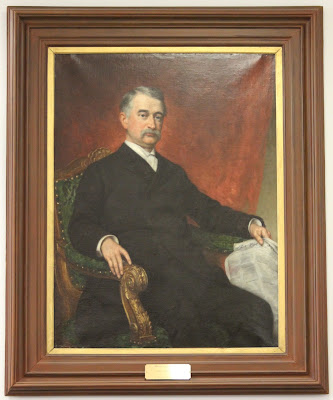 The Green Bay banker and financier Rufus B. Kellogg (1837-1891) commissioned the American artist George R. A. Healy (1813-1894 ) to paint his portrait in Paris, France in 1887. Imbued with the spirit of 19th century Paris, the regal portrait shows Kellogg as a successful businessman reading the French newspaper Le Petite Journal and seated in an ornate green chair, dressed in 19th century business attire, with red drapery background. Kellogg’s philanthropy included the establishment of the public library in Green Bay, as well as an educational endowment at Amherst (MA) College, where an identical version of the portrait hangs from 1892. Rufus graduated from Amherst College before eventually moving to Green Bay. He generously supported many local charities and promoted education, business, literacy, and thrift.

George Healy was a distinguished American portrait painter known for his ability to capture a likeness of the sitter. Winner of several gold and silver medals at exhibits in Europe, He maintained studios in Paris, New York and Chicago. Healy was remarkably facile, enterprising, courageous, and industrious. Among his notable portraits was President Lincoln, President Grant, Lord Nelson, President Jefferson, and Pope Pius IX. The Green Bay & De Pere Antiquarian Society, Inc. purchased the painting among other works of art in 2007 through the support of community donors in order to keep them in the community.

The painting was restored by art conservator Anton (“Tony”) Rajer (1952-2011) of Sheboygan, and was conserved through the support of Associated Bank. It resides on loan in the lobby of Associated Bank, 433 Main Street, Green Bay, Wisconsin 54301.