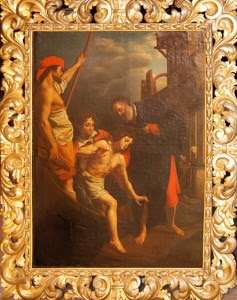 Immensely popular in its day with collectors and connoisseurs, The Hospitality of St. Julian (also known as The Prodigal Son) served as a model for academic artists for centuries. Sometime in the 19th century the Green Bay version was painted on machine-made linen and put in an ornate gold Medici frame in Florence, Italy. Wisconsin hotel owner Frederic G. Hall (1864-1916) purchased the painting in 1909 in New York and placed it in his Beaumont Hotel in Green Bay, where it remained until gifted to the Kellogg Public Library in 1917.

The painting was exhibited at the Wisconsin State Historical Society in 1911 and the Art Institute of Chicago in 1912. In 2007 it came to the collection of the Green Bay De Pere Antiquarian Society through community purchase. The research and conservation was carried out between 2009-2010.

The Hospitality of St. Julian is on indefinite loan to St. Francis Xavier Cathedral in downtown Green Bay, and is currently displayed in the hospitality room at the Green Bay Diocesan Museum at 140 South Monroe Avenue. An unveiling ceremony took place on December 15, 2011, with representatives of the Green Bay and De Pere Antiquarian Society and Neville Museum on hand.

In the painting St. Julian is shown welcoming a young man, possibly a leper, who arrives by boat. The youth is helped by two other men to disembark. On the extreme right is Julian’s wife, who gives alms to the poor. The youth stepping from the boat is an allegorical figure of Christ, who is about to forgive St. Julian for accidentally killing his parents.

Acquisition and conservation of The Hospitality of St. Julian supported by Associated Bank and many other community donors and partners.