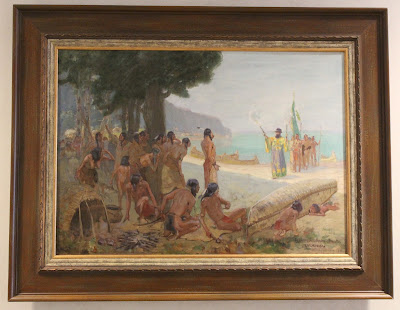 Jean Nicolet (1598-1642) was a young French explorer under Samuel de Champlain. He would become recognized for the discovery of Wisconsin in 1634, bracing the perils of wilderness never before penetrated by Europeans, and bringing back accounts of rich furs and friendly Indians, which became a magnet drawing other explorers, traders and missionaries.

It was a time when Europeans thought that in the area of the upper lakes they might find a route to Asia. Nicolet, therefore, expecting to meet Chinese mandarins carried with him an oriental damask gown, ornamented with beasts and birds.

Jean Nicolet’s exact route into the wilderness is unknown, since the explorer’s journals were lost. Wisconsin historians accept the probability that he landed somewhere along the east shore of Green Bay believing that he had found a village of Asiatics. Attiring himself in this damask robe, he advanced upon the beach and, as a salute, fired pistols which he held in each hand.

Deming, noted for his images of Native Americans and wildlife, was commissioned in 1904 by President Robert Lairs McCormick of the Wisconsin Historical Society to paint a depiction of the Landfall of Jean Nicolet in Wisconsin. This study painting was accepted for a much larger work to be painted for the Society’s museum.

The subject matter of this work directly relates to our region’s history, but the artist’s inscription also makes the work significant to Wisconsin: “E. W. Deming to my friend Reuben Gold Thwaites.”

Thwaites (1853-1913), a prominent historian, was the Secretary and Superintendent of the Wisconsin Historical Society from 1887 to 1913. His transcriptions from Lewis and Clark expeditions are still used as primary sources today. On July 27, 1911, Thwaites gave Deming’s painting to the Kellogg Public Library in Green Bay as a gift to the community.