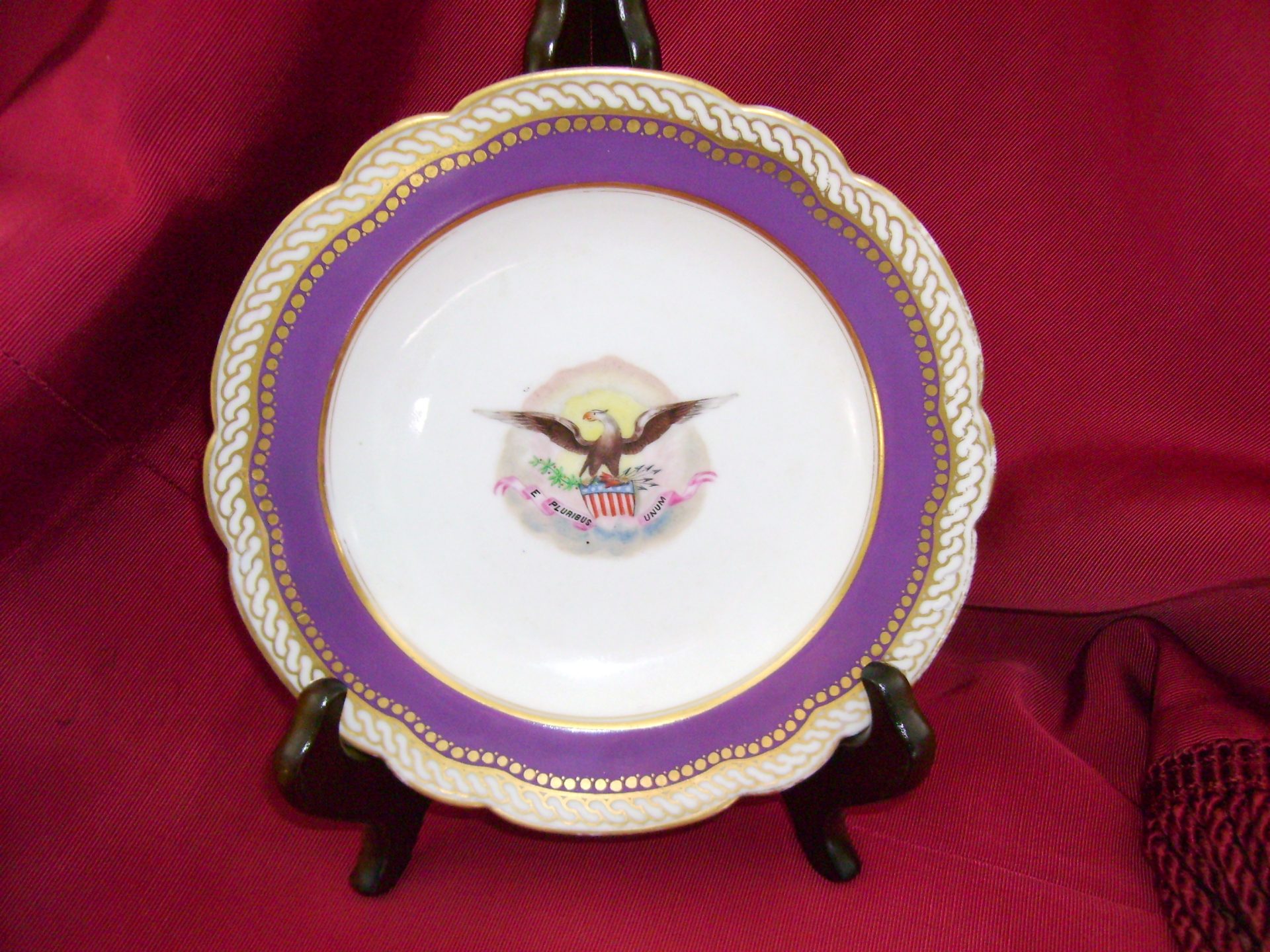 The Lincoln Presidential China artifact set consists of two different sized plates. The edges of each plate are scalloped and consist of concentric circle patterns of white with gold and “solferino” purple colors. The white porcelain center features an eagle with the U.S. flag, an olive branch and bunting reading “e pluribus unum” which means “out of many, one”. Red markings indicate “Fabrique par Haviland & Co. J. W. Boteler and Company Washington”. These two plates are national artifacts, a part of American history. The two plates were part of President Abraham Lincoln’s service set which was purchased in 1861. Research indicates that these two plates are understood to be part of the original set made by Haviland in Limoges, France.

On May 16, 1861, while at Haughwout’s Emporium in New York City, Mrs. Lincoln purchased new official White House china. The initial 190 pieces of French Limoges Porcelain cost $3,195.00. The pattern she chose was interestingly from a specimen plate made for President Pierce, but turned down by him. Mrs. Lincoln loved it and ordered the plates, but requested the color band to be “solferino” purple instead of blue.

Important visitors to the White House were known to leave with “souvenirs”. As a result, the number of plates declined after each State Dinner. When President Ulysses S. Grant entered the White House, so many pieces of the 190-china set were missing or broken that the official White House china needed to be reordered again. Afterwards, security measures were implemented and an end to souvenir collecting in the White House was enforced. The Green Bay & De Pere Antiquarian Society includes the two Lincoln Presidential china plates in its inventory in 1959. The records indicate, “Items given by Jessie Buchanan to Antiquarian Society”. Documentation of ownership of the plates only goes back to Jessie Buchanan who, according to the organization’s records, donated then to the Green Bay & De Pere Antiquarian Society.

Here lies the mystery. There are two differing thoughts on how the plates came into the ownership of Mrs. Jessie Buchanan. Each has been supported by reputable Antiquarian Society members. The records held by the Antiquarian Society indicate that one of its founding members, Jessie Hurlbut Buchanan, purchased the plates from the Morgan L. Martin family estate and later donated them to the Green Bay & De Pere Antiquarian Society. An inventory of contents of the Old Fort Howard Museum Hospital dated 1937 indicates the two plates were originally part of the Morgan L. Martin estate sale. After exhaustive research, as of yet no references to the plates have been found in the Martin estate inventory of the family diaries, journals, or scrapbooks. There is no record of the plates in the very detailed itemized inventory of the family’s final estate associated with the wills of Deborah and Sarah Martin. There is no documentation as to how the Martin family acquired the pieces. At this time, there is no solid evidence to support that the Martin family ever owned the plates.